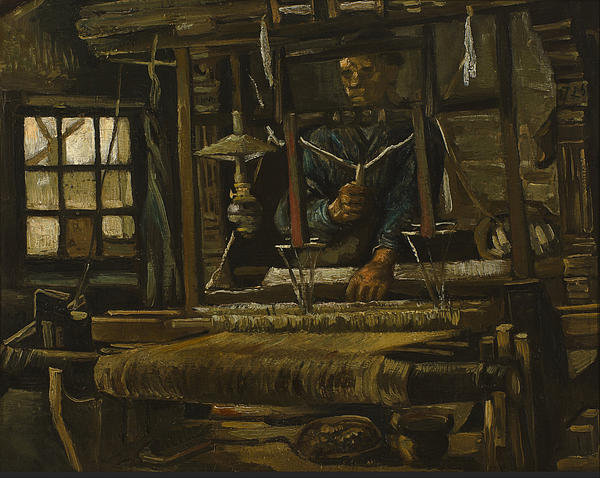 Vincent Van Gogh A Weaver’s Cottage
1884 Fine Art Painting
In 1884, Vincent van Gogh made a series of drawings and paintings of rural artisan weavers and the loomshops in their cottages. Van Gogh was interested in the “meditative appearance” of the weavers.
“A weaver who has to direct and to interweave a great many little threads has no time to philosophize about it, but rather he is so absorbed in his work that he doesn’t think but acts, and he feels how things must go more than he can explain it.” he wrote in 1883. By then rural weaving was not a prosperous trade; income varied dramatically depending upon crop yields for material and market conditions. Weavers were living a poor life, especially in comparison to urban centers of textile manufacturing nearby such as Leiden. The rural artisan’s livelihood had become increasingly precarious.
Van Gogh wrote to his brother Theo, “Their life is hard. A weaver who stays hard at work makes a piece of about 60 yards a week. While he weaves, his wife has to sit before him, winding – in other words, winding the spools of yarn – so there are two of them who work and have to make a living from it.”