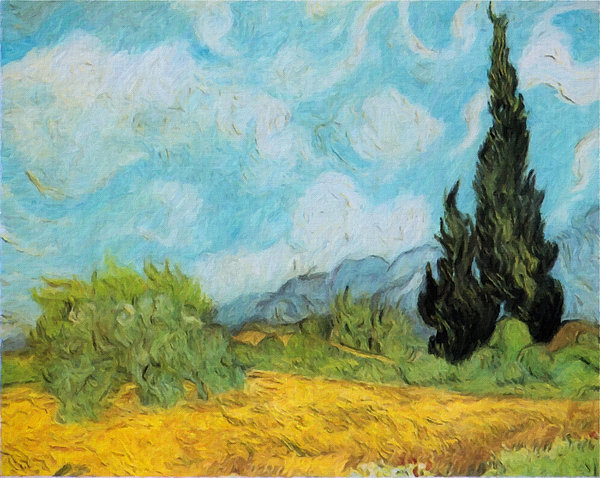 Third version of this motif.
A Wheatfield with Cypresses (occasionally called A Cornfield with Cypresses) is any of three similar 1889 oil paintings by Vincent van Gogh, as part of his wheat field series. All were executed at the Saint-Paul-de-Mausole mental asylum at Saint-Remy near Arles, France, where Van Gogh was voluntarily a patient from May 1889 to May 1890. The works were inspired by the view from the window at the asylum towards the Les Alpilles mountains. The National Gallery in London holds a similar version painted in Van Gogh’s studio in September 1889, bought with the Courtauld Fund in 1923. It is unlined, and was never varnished or waxed.
Small version in a private collection, 51.5 cm (20.3 in) by 65 cm (26 in) (F743), September 1889.
The other two versions can be found in our “Vincent van Gogh” gallery.